The term “colic” strikes fear among horse owners. Colic is not a disease, but rather a generic term that refers to a combination of signs that alert us to abdominal pain in the horse, which may be due to an accumulation of gas, fluid or feed. The severity of colic can range from mild to severe, and should NEVER be ignored. Many of the conditions that cause colic can become life threatening in a relatively short period of time. Among domesticated horses, colic is a major cause of premature death, so knowledge of different types, signs and what to do are extremely important.. The incidence of colic in the general horse population has been estimated between 10 and 11% per year. In a recent study, colic was second only to old-age as the leading cause of death in horses. The most important rule is to CALL THE VET. Only by quickly and accurately recognising colic (and seeking qualified veterinary help) can the chance for recovery be maximised.

Colic symptoms have been associated with composition of diet, changes in diet, feeding practices, exercise patterns, housing and inappropriate parasite control programs. With nutrition related disorders being the top three causes of colic in otherwise healthy horses, we should consider carefully our horse’s feeding program.

Colic is a broad veterinary term used to describe abdominal pain. There are several different types of colic, all of which occur in the gastrointestinal tract.

Spasmodic colic: Spasmodic colic occurs when the bowel is contracting in an abnormal manner creating painful spasms and somewhat of an “over-active” gastrointestinal tract. Spasmodic colic’s usually respond very well to anti-spasmodic drugs along with other therapeutic treatment.

Impaction colic: This term describes when the bowel, usually the large intestine, is blocked by a firm mass of food. This is a fairly common type of colic and can often be easily resolved on farm with administration of fluids and / or liquid paraffin via a stomach tube.

Gas colic: Gas can accumulate in the stomach as well as the intestines. As gas builds up, the gut distends, causing abdominal pain. Excessive gas can be produced by bacteria in the gut after ingestion of large amounts of grain or mouldy feeds. A nasogastric (stomach) tube inserted by a veterinarian is used to relieve the pressure of the gas and fluid accumulation in the stomach.

Sand colic: Horses that are fed on the ground or housed in very sandy soils are at higher risk for sand accumulation in the gut and pain or colic being associated with a build-up of sand in the gastro intestinal tract.

A major problem for horse owners is being able to identify the signs of colic. That’s because signs can vary greatly between individuals and may also depend on the severity of the pain. However, among the more common signs are:

When horse is in more severe pain: 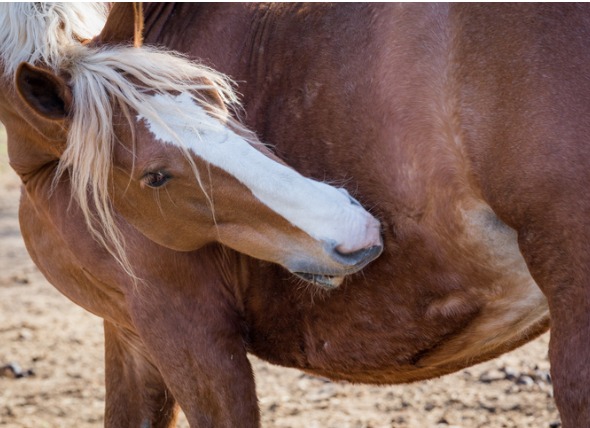 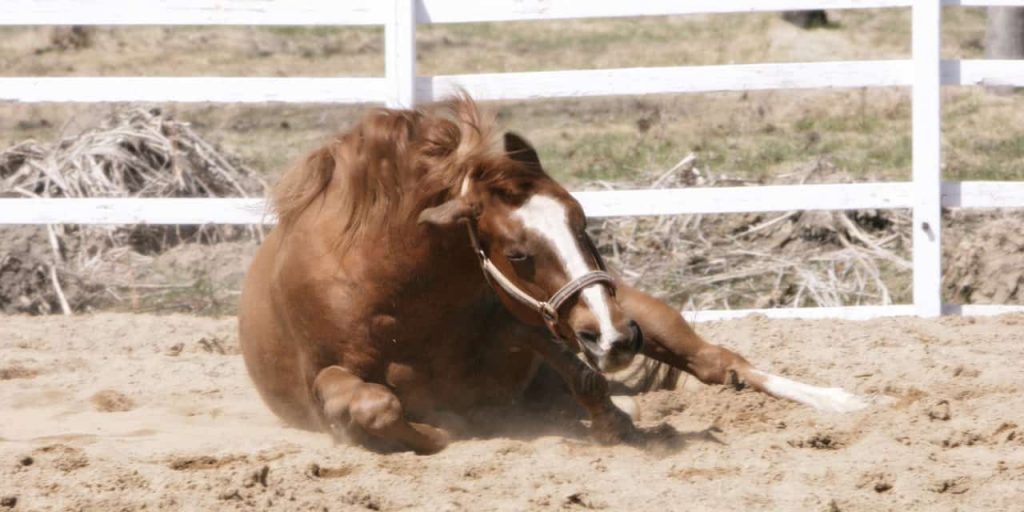 Keep the horse as calm and comfortable as possible whilst waiting for the vet. Allow the animal to lie down if it appears to be resting and is not at risk of injury. Sometimes the old adage of walking them can inflict more harm than good. If the horse has a twisted bowel it may hasten the pressure building up or weaken the gastro-intestinal tract lining. Conversely, if the horse is rolling or behaving violently, attempting to walk the horse slowly may be beneficial. It is important to not administer drugs unless specifically directed to do so by your veterinarian. Follow your veterinarian’s advice exactly and await his or her arrival.

When the vet arrives, he/she will establish the severity of the colic and identify its cause. Examination and treatment may consist of the following procedures:

Composition of the diet

Carbohydrates are the primary source of energy in the diet of horses. Horses evolved to digest forages high in structural carbohydrates (fiber) through bacterial fermentation in a highly developed large intestine. However, the energy needs of performance horses, pregnant and lactating mares and even young, growing horses are higher than the calories supplied by a forage-only diet. To meet this increased energy demand, horses are commonly fed more energy dense feedstuffs such as grain concentrates. Grain is rich in starch and sugar, and unlike forage, it is digested with enzymes secreted in the small intestine. Surveys have indicated that horses fed large single grain meals or large volumes of grain throughout the day are more likely to colic with the primary cause due to the limited capacity of the small intestine to digest grain.

Research has shown that small volumes of grain (starch) are digested at a rate of approximately 80% in the small intestine. If the amount of starch is increased, then the small intestine becomes overwhelmed and the excess starch flows into the hind gut where it upsets the microbial population and decreases the pH resulting in hindgut disruptions and colic. No more than 2-3 kgs of grain should be fed in a single meal to a 450 kg horse.

An association between feeding practices and disturbances in gut function has long been recognized. Studies have shown that dietary changes, particularly a change in amount of grain fed, contribute to an increased risk for colic. Research has also listed changes in batch of hay or type of hay as potential risks for colic. Therefore all dietary changes should be made gradually over a 2-week adjustment period. An abrupt change in type of forage fed or an increase in the amount of grain will result in an increased rate of fermentation and noticeable changes in the microbial population, as well as acidity in the hind gut. With a sudden increase in grain, a portion of the sugar and starch passes undigested into the cecum where it causes gastric disturbances. These disturbances to the hindgut environment put the horse at greater risk for colic, diarrhea, and laminitis.

Situations to avoid include (1) a sudden introduction to grain feeding or an abrupt increase in the amount of grain concentrate; (2) the feeding of large grain meals that overwhelm the capacity of the small intestine; and (3) rapid changes in the amount, batch, or type of hay being fed.

Housing conditions can influence the risk for colic; horses maintained outside all year long are less susceptible to colic than horses living indoors. Horses that live indoors typically get less exercise and are more likely to accumulate gas within their digestive systems compared to horses freely exercising outside. Further, a change in housing is often associated with a change in diet further influencing the likelihood of colic. No association has been found between colic and the type of bedding. However, impaction colic can occur if horses are bedded on straw and consume large volumes of this non-digestible fiber when not given free access to a more digestible fiber source (e.g. hay, forage cubes etc.). Any large changes in exercise pattern can cause stress to the animal and bring about colic. When starting a horse’s training program or bringing them back in to work after a break, make sure all changes in their exercise programs are done gradually.

Horses that fall into high-risk categories, such as stabled horses in intense training and fit horses recently injured, should be monitored particularly closely. Horses should be allowed as much turnout as possible and owners should maintain a regular feeding schedule. Constant access to an abundant source of clean, fresh water is imperative to the avoidance of colic. Care should be taken not to feed moldy or spoiled grain or hay. As with the diet make any housing, management, and exercise changes gradually.

There are a variety of different factors that can cause colic in horses. These include, parasite infestation, sudden changes in diet and/or irregular feeding, insufficient or unclean water.